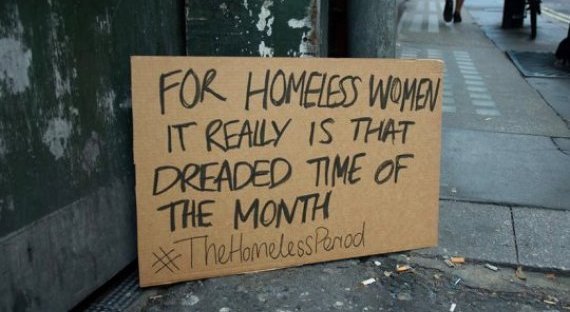 It’s that time of the month. Your Fairy Clot Mother comes to visit. Uncomfortable for any woman, but, could you imagine not having sanitary items during that time at all? This is the harsh reality for many homeless women across the world. We caught up with Homeless Period Liverpool’s activist Natalie Denny to talk about their project…

What is Homeless Period Liverpool?

The Homeless Period Liverpool is a volunteer led initiative providing sanitary care packs to homeless or vulnerable women in and around the Liverpool and Merseyside areas.

How long have you been working with HP?

I’ve been coordinating the project in Liverpool since its launch here in May 2016. The Homeless Period Liverpool is an initiative to support homeless and vulnerable women, and people who have periods during menstruation. There are already projects set up in London, Birmingham and Edinburgh, Rugeley and more recently, Andover. I contacted Keely and Phoebe, the Founder and National Coordinator of The Homeless Period and they gave me really good pointers on how to get it started and I ran with it from there.

I am a strong advocate for women’s issues and believe we should support each other especially those that are vulnerable. Ideally women should have access to sanitary items free of charge similar to how condoms are distributed. The Homeless Period Liverpool will be supporting the campaign that aims for this to happen.

What’s the idea behind it?

For homeless women, it really is that dreaded time of the month. With limited or no access to sanitary products, they’re often forced to go without. Some women are forced to use ripped up cloths, old socks or toilet roll from public toilets, or make a few tampons last the entire length of their period. This can lead to infections, so it doesn’t just have an emotional impact but is a danger to women’s physical health. The team will create much needed special care packages for women and donate to various projects across Liverpool.

How does it work?

The Homeless Period Liverpool is made up of a team of local volunteers who have contacted homeless organisations, women’s services including local businesses and student councils to see if they will take pink collection bins to pick up any sanitary items that people are kind enough to donate. Liverpool Homeless Football club in the LCVS building on Dale Street and News From Nowhere on Bold Street and Big Love Sista in the Gostin Buildings are the donation stations and we will have a donation bin located in the Guild of students also and are currently in talks with organisations across the city.

Why is this important?

Periods can be an absolute nightmare at the best of times. Cramps, bloating, back ache and just feeling generally crap are some of the wonderful things the female of the species has to look forward to on a monthly basis. Imagine having to choose between buying food or buying tampons or having no underwear to change into or a place to go to when you feel low. Sanitary items which are taxed at 5% and classed as a ‘luxury’ are not cheap.

We collect donations of wipes, underwear and sanitary items and produce female care packages which are delivered to various projects and shelters across the city. We also have a GoFundMe page set up for people to donate. The money and donations go towards creating our special period care packs, which each contain underwear, wipes, and a selection of sanitary products. These packs will be going out to other homeless charities and other projects in Merseyside to make a difference for as many women as possible who are in difficult circumstances, allowing their dignity and health to be maintained through their periods.

We are launching a special campaign for Christmas providing packs that have a variety of things in for vulnerable and homeless women. We will be throwing a fundraiser in December. We’ve also have had an art exhibition arranged by Amanda Atkinson who is a lecturer and researcher. She raised over £270 for us last month. More information about these events can be found on our Facebook page.

What are you aiming to do with Homeless Period? Where can you see it going (perhaps working with shelters? building a shelter?)

We have donated sanitary care packs to foodbanks, women’s refuges, homeless street teams, refugee and asylum seeker projects and have 3, soon to be 4 donation stations. We were inundated with donations so spread out across Merseyside and hope to be donating to all 5 areas within Merseyside by the end of the year. We also want to campaign for this issue to be taken seriously by government and homelessness in general to decrease. We back the Crisis Holmelessness reduction bill.

How can people get involved?

If you want to donate to Homeless Period Liverpool you can drop off or send sanitary items to the below address:

We also have a GoFundMe Page if you would rather donate that way. We also have a volunteer page on Facebook. If you search Homeless Period Liverpool Volunteer Team one of the team will approve you. Here we post all updates and news to do with the project and ways to support it.

Natalie Denny is a Health and Wellbeing Regional lead and community activist from Liverpool. She also volunteers for Merseyside People’s Assembly, a grass roots anti-austerity group and has worked with young people for fifteen years. She has also been a guest speaker and poet for women’s rights group Reclaim The Night Liverpool.

The Vaginalogue was created and curated by Kate Menear in August 2016. A writer, blogger and women's rights activist based in Liverpool, UK, Kate has been a feminist activist for a number of years; challenging sexism and calling out harmful misogynist culture. You can follow Kate on Twitter here.