Every month I attend a free event run by a friend of mine in Liverpool called First Draft Scratch Night at the Liverpool Everyman & Playhouse which hosts comedians, singers, magicians, clowns, actors and actresses in order to allow them a space to try out new material. Recently I saw a 10 minute segment of a play called ‘The Brink’ that was moving, poignant and powerfully thought-provoking. It stunned the audience into silence. I caught up with the play’s writer Helen Jeffery to ask her about her story…

What’s the play about?

The play is about Holly and Mark, a couple who are looking forward to becoming new parents and what happens to them when Holly is plunged into the depths of severe post natal illness following the traumatic birth of their daughter. It’s not as depressing as it sounds!! There’s actually a lot of comedy in the piece, albeit ‘gallows humour.’

Where did the idea come from?

It’s based on my own experiences – I suffered PNI following the birth of my daughter 9 years ago. I also spoke to other men and women who have been affected by PNI.

Basically Post-natal illness is an umbrella term which includes the range of symptoms that women can suffer from. You can read more information on PNI here. Personally I think the term ‘post natal depression’ can be misleading as people seem to link that to the ‘baby blues’, which most women suffer from a few days after birth due to a change in hormonal/chemical levels – this is NOT the same as post natal illness.
The term that is used more commonly now is perinatal mental health as it acknowledges that for many women symptoms can begin in pregnancy, not just after they have given birth.

How long has this idea been in the making?

I first started to write the piece about 18 months ago – however I guess it’s been 9 years in the making! The version that’s on at The Unity Theatre is a 2-hander and shows the impact of PNI on both the Mum AND Dad. The original version (performed at The Lantern in May 2016) was a one -woman show that only told ‘Holly’s story.’

What is ‘The Brink’?

The Brink refers to Holly’s state of mind during her illness-  Holly is literally clinging onto reality and her sense of self.  It’s a metaphor for anyone who has ever found themselves on the edge and contemplated what might happen if they jump.

Why is this show important?

To raise awareness of perinatal mental health in the broadest sense, to break down the stigma of mental illness and to enable families who have experienced PNI to see that it IS possible to come ‘out’ the other side and go on to have another child. If this show acts as a catalyst to get people talking and helps to bring about a greater understanding of PNI and how it can be treated then I am happy.

Also, you say you want to inform, raise awareness etc, were you not readily informed during or after your pregnancy?

During my pregnancy (9 years ago) I was not asked about my moods once during my fortnightly checks with the midwife – I think this has changed recently as perinatal mental health is much more in the media than ever before. I’d like there to be an openness about this – the more we talk about it and explore different treatment options the better for women and their families. We need to do MUCH more to stop this happening.

How much was there in way of support or information for sufferers of PNI, has this changed or do you think it’s stayed the same since your own experience 9 years ago?

I do think things have improved in the last 9 years –  certainly for me I was monitored closely during my second pregnancy because of the experience I had the first time. I’d now like to see the same level of rigour in monitoring mental health applied to ALL expectant mothers, not just those who fall into the obvious ‘risk factors.’

Where can you see the show going? Do you have any plans for development in the future?

I’d love to take the show up to The Edinburgh Fringe in 2017  – however that won’t happen without funding! I’m also interested in exploring the idea of using the play as a training device for healthcare professionals.

The Brink is on at The Unity Theatre, Hope Place, Liverpool on Tuesday 20th September 8pm.

Tickets are available via the website or by ringing the box office. For more information click here. 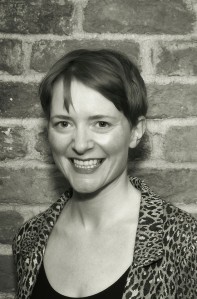 Helen Jeffery attended Warwick University where she gained her B.A.Hons in Theatre Studies & Dramatic Art, before training as an actor at Birmingham Theatre School. In addition to her work within the field of Theatre in Education, Helen has also worked for Middle Ground, Watershed Productions, Impact, Rent-a-role and Twisting Yarn. In 2002, Helen completed her PGCE to become a qualified teacher of English and Drama. She currently teaches Drama at a Secondary School in Southport and has recently completed the Playwriting Programme at the Liverpool Everyman and Playhouse Theatre. Her first play ‘The Brink’ has been performed at The Lantern Theatre, Liverpool as part of the ‘Shiny New Festival’ and the King’s Arms, Salford as part of the GM Fringe Festival. Helen also adapted a version of ‘The Brink’ for ReWrite Theatre and this was selected from over 140 other scripts to be performed at Theatre503 in London on 11th July 2016.

The Vaginalogue was created and curated by Kate Menear in August 2016. A writer, blogger and women's rights activist based in Liverpool, UK, Kate has been a feminist activist for a number of years; challenging sexism and calling out harmful misogynist culture. You can follow Kate on Twitter here.